Ammon Bundy, 4 others arrested in Oregon standoff amid shots fired according to reports

Ammon Bundy, 3 others arrested in Oregon standoff amid shots fired according to reports

Ammon Bundy, the leader of the armed group occupying a federal wildlife refuge near Burns, Oregon, and three others have been arrested by law enforcement amid shots being fired, according to local media.

According to KATU News, Bundy and the others were arrested near the Malheur National Wildlife Refuge.

Oregon Live reported that two people have been shot, citing a “self-styled journalist” named Pete Santilli. Reports of shots fired, injuries and arrests have not been confirmed. 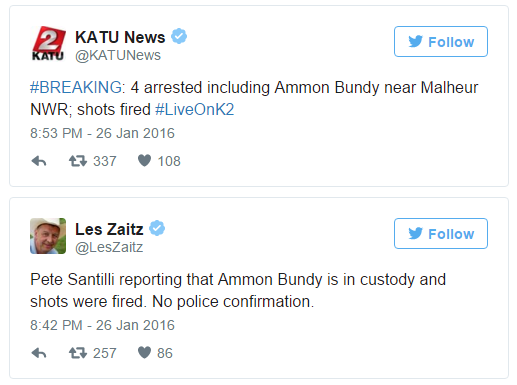 The outlet also cited Santilli when reporting that the FBI has told the protesters at the refuge to leave immediately.

Bundy and his band of protesters have occupied the refuge for weeks now. The group is protesting federal ownership of wide swathes of land in the West, and wants to see control of the land returned to local and state jurisdiction.